“Could a greater miracle take place then for us to look through each other’s eyes for an instant?” Henry David Thoreau

As I reflect on my judging career, 2018 in particular, I’m so grateful for the remarkable memories. In February I was honored to judge the Scottsdale Arabian Horse Show, “the greatest show on earth.” In October I was invited back to Scottsdale to judge the Silver Sire Futurity that is held in conjunction with the Arabian National Breeder Finals. Friday evening a good group of yearling colts came bounding into the arena. My judging panel included exceptional judges, John Rannenberg and Jerry Canda.

As the individual judging began, one handler struck me in particular. This young man appeared hyper focused on every move he made. He was very careful and precise in everything he did. It also became very apparent, that he was in complete sync with the colt he was leading. It was obvious that the horse and his handler had a unique bond. Their love and trust of one another was truly palpable. I couldn’t help but notice that this young man had some significant scars on his head. As the ring stewards took our cards and the results were tabulated, I wasn’t able to stop thinking about this young man’s presentation. I knew there was a back-story and I was anxious to learn more. I could never have predicted what was to come.

When this young man and his handsome colt were named Reserve Champion, he was overcome with emotion, to an extreme that we seldom see. He immediately hugged his beloved colt and cried inconsolably. The crowd erupted. Not just of approval and excitement, but of obvious affection for him and an understanding of just how meaningful it was. Then the internationally acclaimed halter trainer, Rodolfo Guzzo entered the arena. As tears streamed down his face, he embraced the young man.

What did I learn? I learned the young man was Rodolfo Contatto Guzzo (Rodolfo Guzzo’s oldest son). I learned that his son was in a near fatal accident when he was very young, that left him with some debilitating injuries, including total blindness in one eye and a mere 25% vision in the other eye. I learned that through hard work and perseverance and the support of a loving family, a life was restored. I learned that the honest bond between man and horse is not only holistic, but can indeed heal. I learned that through God’s grace, all things are possible! 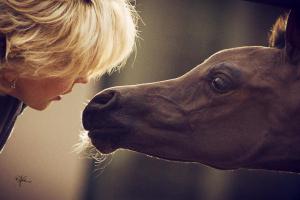