In October of 2015, John Mitchell awoke to find his beloved wife Deb, lying on the floor. Thinking she was simply trying to alleviate her headache by lying flat as she had done in the past, he called to her to come to bed. When she did not respond, John discovered that she was unconscious. To his horror, he could not wake her. She had suffered a massive stroke and was placed on life support. Doctors told John that there was a 1% chance of recovery from the type of stroke Deb had experienced.

“Stroke is the leading cause of serious, long-term disability in the United States. Each year, approximately 795,000 people suffer a stroke. About 600,000 of these are first attacks, and 185,000 are recurrent attacks. Nearly three-quarters of all strokes occur in people over the age of 65.” *Stroke Statistics | Internet Stroke Center

“I remember meeting Deb and John, in the barn isle during a farm tour at Royal Arabians several years ago. We instantly connected sharing conversation about the beauty of the horses and the serenity and peacefulness the barn offered. I was amazed at how they immediately were studying breeding lists and taking notes of all the winning horses while attending the shows. It was clear this hobby was also a passion for them both. Our friendship grew to lunches, barn days and social outings. In the summer of 2015, Deb told me about purchasing a beautiful mare named ‘Mokha’. She told me she fell in love with her the minute she saw her and insisted to John they had to buy her. She was so excited to show her at the upcoming Arabian National Breeder Finals. KBT Kharra Mokha was named Champion mare that year… everything seemed to be storybook perfect. Then I received a call from Greg Knowles a couple days later, ‘Lee, have you heard about Deb?’ I was in shock to hear she had suffered a massive stroke and was on life support. I immediately shared the news with the Royal barn family and we started prayer chains hoping for a miracle.” –Lee Courtney 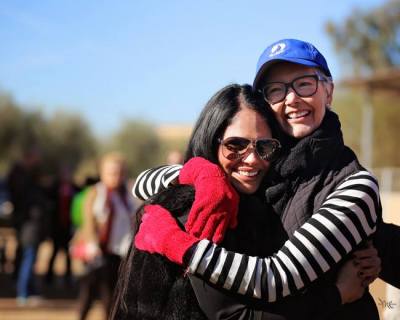 “I first met John and Deb at an introduction to the Arabian horse seminar that Greg Knowles and I were hosting at his farm. When they phoned in response to an ad we had placed for the seminar, Deb explained to Greg that they had purchased 2 unborn foals from Royal Arabians at their farm tour and wanted to learn more about the wonderful world of the Arabian horse. Her love for the horses, her desire to learn as much as she could as fast as possible and John’s love for her, inspired me. I had no doubt this was the beginning of a beautiful friendship!” -Riyan Rivero

“Those who meet John will never forget him. He is a down to earth, approachable, pragmatic man. When I first met Deb, I was blown away by how incredibly bright and caring she appeared to be. After a very successful commercial real estate career in Chicago, she and John packed up their lives and headed west to begin their next chapter. After one presentation of the horses, I could tell that both John and Deb were going to fall hopelessly in love with the Arabian horse. In the beginning, the passion for the horses was much stronger in Deb. I’d say John is now equally addicted.” -Greg Knowles 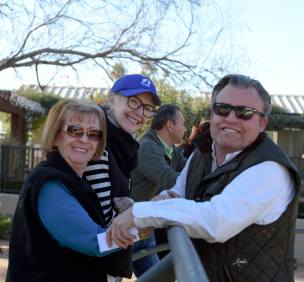 “We first met Deb at the Arabian Horse Farm Tour we hosted in 2014. She was so sweet and we could see instantly how passionate she was. We spoke for a long time about their options for getting started in the Arabian horse industry. A few days later, she and John came back to the farm to discuss the possibility of purchasing an unborn foal. They ended up purchasing two. A few short months later, our mares delivered two amazing fillies for these wonderful newcomers. We were thrilled for them! Amanda Fraser and Cindy McGown

Every five seconds, someone in this country suffers a traumatic brain injury; a third of those result in coma. Doctors often tell families to talk to their loved ones, even if they’re unconscious, but the question is: Can they hear? Studies have shown that they can in fact hear us. To this author, there is no longer a question. Tears filled my eyes, and hope flooded my heart as Deb shared with me her experience while in her coma; “I was confused about where I was and why I couldn’t speak, but I could hear John talking to the nurses about the photos of the horses on the walls of the hospital room. He tried to tell an inquisitive nurse about Mokha’s pedigree and got it all wrong. I so badly wanted to wake up and correct him!”

“Truly the year following Deb’s stoke was nothing short of a miracle. We recorded the sound of the horses walking the barn isles so she could hear familiar things and hung photos of Deb and her beloved horses all over the hospital room.” –Lee Courtney 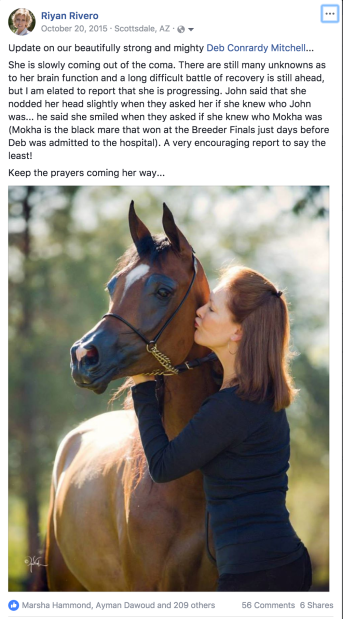 As the doctors slowly brought Deb out of the now medically induced coma, there were many unknowns. Doctors could not know if she’d be able to walk, speak or lead any kind of normal life. John never shared a moment of doubt when he’d update us on her status. He was visibly exhausted and concerned, yet he never breathed a word of doubt that she would fully recover.

“Anyone who has the opportunity to really know John and Deb will notice two things pretty quick; their love for one another and their love for their horses. When Deb suffered her stroke, everyone in our Arabian community was stunned. She had just been on the rail cheering for her horses beaming with joy and the next day literally, she was fighting for her life. There was no one more committed to her recovery than her beloved husband, John. He was by her side day and night. It really was the type of thing you see in a great movie about the power of love. When she was released from the hospital, she pressed John daily to go see the horses. In their own gentle way, her horses helped her heal and encouraged her to not give up. Not only did she not give up, she set a goal to show her favorite mare at the next Breeders Finals and began to prepare.” – Karen Lincoln

“If you have spent any time at all with John And Deb Mitchell, you will quickly see their love and passion for the Arabian Horse. I have had the privilege of seeing the strength of this love up close and personal while Deb was recovering from her stroke. She spent as much time as she possibly could at the barn with her horses. In the beginning, she loved them from the confines of her wheel chair. As she began to get stronger, she set goals for herself that seemed insurmountable to the rest of us. Deb is the most determined, committed and hardest working woman I have ever met. Love and commitment conquered every obstacle as she entered the ring with her beloved mare, exactly one year later and was awarded Top Five honors in a competitive class at the ANBF.” – Al Gruppen

“Deb was very hard on herself because she knew she wasn’t getting the steps correct or fast enough, but Mokha covered every flaw for her. She stood at attention beautifully with her ears forward and loving expression in tact. The bond between Mokha and Deb was incredible and left all who knew her amazing story in tears as she was awarded Top Five.” – Karen Lincoln

That beautiful moment at the 2016 ANBF served to only be the beginning for John and Debs success in the show ring. Four months after that emotional win with Mokha, John and Deb achieved what many consider to be the ultimate show ring success for Arabian horse owners, Scottsdale Senior Champion Mare with Rose of Gazal APA and Greg Knowles at the lead. It is impossible to properly portray what it was like for those of us who knew this beautiful survival story to compose ourselves as John and Deb received this incredible award. This past October, two years after defying death, Deb entered the arena once again at the 2017 ANBF. This time she was showing the newest member of their mare band, Taleed Al Qardibiyah. 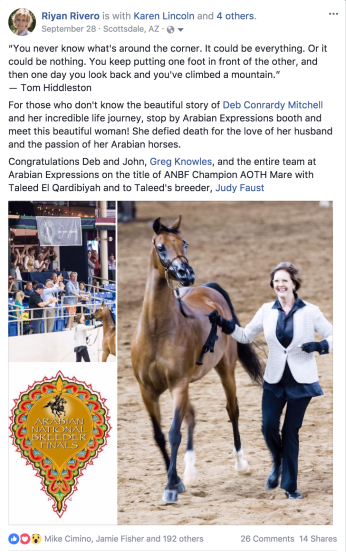 “I will never forget her face when they announced her as the Champion. It was sheer and Utter Joy! I threw my arms around Greg as he sobbed for Deb. That victory closed a very challenging chapter of Deb’s life as it marked the beginning of a new one with much hope, inspiration and love for her husband, her horses and the people she adores.” -Karen Lincoln

Deb and John’s journey has touched countless lives and inspired those of us who know them beyond comprehension. Their love for one another, their commitment and strength and their passionate desire to not only own Arabian horses, but to understand them, to grow with them and to defy the odds with them is the stuff that dreams are made of.

“In our time in the industry, we have yet to meet more sincere, genuine people with such an adoring passion for Arabian horses. The mares they have purchased in the past few years are stunning. They have put a remarkable stamp on their very young breeding program. Deb is a true treasure and we hope to keep her as a friend for a very long time.” –Amanda Fraser and Cindy McGown

“I know for me, life truly isn’t what we have, but what we share. John and Deb have helped me realize that the people who are my family and friends from the Arabian horse community are of the greatest blessings of all.” –Lee Courtney